Skip to main contentSkip to navigation

Robert J. (Bob) Gallagher grew up on the edge of Amish country in Pennsylvania and he still remembers the day that the first and only stoplight appeared in his hometown. He moved to Moore County a decade ago with his wife, an active-duty Army officer.

Bob focuses his practice on drafting estate plans, administering estates, and tax controversy issues. He serves Moore County and the surrounding areas in estate matters and represents taxpayers in disputes before the Internal Revenue Service and North Carolina Department of Revenue.

Bob is a former Trial Attorney in the Attorney General’s Honors Program at the United States Department of Justice – Civil Tax Division. As part of the Tax Division, he represented the United States as both the plaintiff and defendant in a variety of tax-related matters, as well as in bankruptcy cases where the federal government was a creditor. He appeared in Federal District and U.S. Bankruptcy Courts throughout the eastern United States including North Carolina, Kentucky, Tennessee, the District of Columbia, Maryland, Pennsylvania, New Jersey, and Puerto Rico. Bob has litigated personal and business income tax issues, payroll tax assessments (including trust fund penalties assessed against individuals), penalty waivers, challenges to Captive Insurance Companies, FOIA requests, and other tax-related matters.

Bob is also a published author on various legal matters and is licensed in North Carolina, Virginia, and Massachusetts. When Bob is not at work, he can frequently be seen running the streets of Southern Pines with his wife, Molly, and their Vizsla, Celia. In the winter months, Bob works as an NCHSAA referee for scholastic wrestling matches. He also serves as the Treasurer of the Little Nine Conservancy, Inc., a nonprofit that seeks to preserve open spaces near Southern Pines. 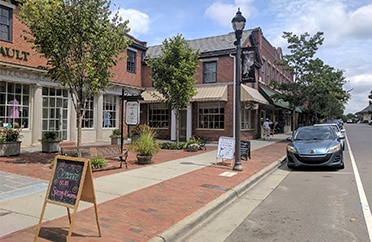 Mr. Jesse T. Coyle is a licensed attorney in both North Carolina and Illinois, as well as a Certified Financial Planner™. Jesse has dedicated his career to helping all families navigate the complicated waters of estate planning and probate matters. Jesse and the members of Carolina Tax, Trusts & Estates are available for your call and would be pleased to assist you.

In regards to Covid-19,  We are reviewing the best guidelines for our city and state for how

we should conduct business and plan to update this message as soon as we can.

Please call our office(s) to get learn how we are engaging with current clients and new at this time.